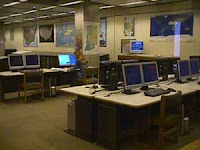 The Geospatial Resources & Map Collection will be closed for Labor Day on Monday, September 3. The GRMC will reopen at 8:00 A.M. on Tuesday, September 4.
Posted by MG at 10:00 AM No comments: 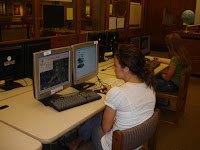 More than Maps in the Geospatial Resources & Map Collection

The Geospatial Resources & Map Collection in Bracken Library houses thousands of maps and atlases and includes a GIS lab with access to useful geographic data and the latest computer software, but other electronic resources are also available in the GRMC. The GRMC includes a collection of over 250 CD-ROM’s featuring geographic and mapping software.

National Geographic’s Back Roads Explorer 3-D is available in the GRMC. It features topographic maps with updated roads for all fifty states. Users can pan, zoom, and customize a route along one or more maps and see the animated 3-D preview. The software also allows the creation of elevation profiles and printing custom maps.

Delorme’s Topo USA is a similar mapping software that includes topographic coverage of United States. Users can search locations, view street-level detail, calculate routes, view 2-D and 3-D terrain with shaded relief and 20-foot contour intervals, and view land cover features and elevation profiles. The software includes draw and print tools for customizing and printing. The software can also be used to download maps and route directions to Palm OS handheld devices and use the Global Positioning System (GPS) through a connection with a GPS receiver.

The AniMap Plus: County Boundary Historical Atlas CD-ROM available in the GRMC displays over 2,000 maps showing all the changing county boundaries in the 48 adjacent states for every year from colonial times to the present. It also includes searchable databases containing more than 240,000 cities, towns and other populated places, over 30,000 historical sites, and 100,000 cemeteries, all of which can be plotted on the maps. This software enables users to locate historical towns which are not on current maps or which are now in a different county.

Some of compact discs in the GRMC are available for use in the GIS lab, but some also circulate for two weeks. For more information about the collection of computer software in the GRMC, contact the staff Monday through Friday from 8:00 A.M. to 5:00 P.M.
Posted by MG at 4:06 PM No comments: 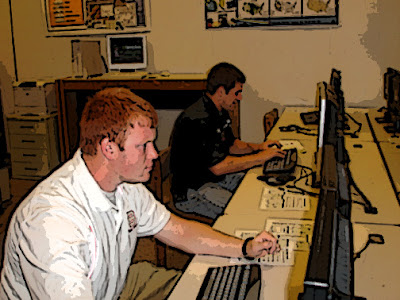 ESRI developed a movie presentation about how GIS is a part of our lives every hour of every day. The presentation features examples of GIS maps and applications at http://www.esri.com/company/gis_touches/everyday.html

The Geospatial Resources & Map Collection features a GIS lab with dual monitors, and a GIS Specialist is available to assist with projects and data retrieval. The GRMC is open Monday through Friday from 8:00 A.M. to 5:00 P.M.
Posted by MG at 4:12 PM No comments:

GRMC an Extension of the Classroom 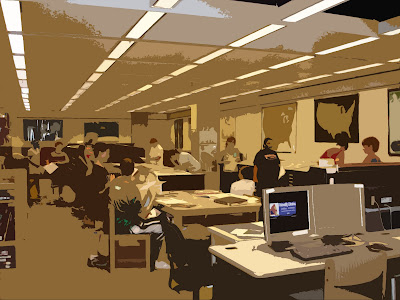 Back to School in the Geospatial Resources & Map Collection

Classes at Ball State University begin on Monday, August 20, and faculty members are encouraged to extend classroom learning and research to the Geospatial Resources & Map Collection. The GRMC will create an instruction session tailored to the needs of your students on such topics as finding and using maps, types of maps and their use, sources for locating geospatial data, and tools for researching geographical information.

Class assignments requiring the use of the GRMC or any part of its resources are encouraged. The GIS Specialist can show students how to use GIS and geographic data in special projects in the GIS lab. Materials from the Collection may be used in a special study area of the GRMC, and faculty may reserve maps when an entire class will be using the materials.

Orientation tours of the GRMC for school and community groups may also be arranged. Small-group presentations can also be accommodated.

Individual students may find many resources available in the GRMC. Students writing research papers may wish to borrow or scan a map or part of an atlas to add to their paper. And students presenting speeches may wish to borrow a map as a visual aid. The Collection includes many poster-type maps that cover special interest topics like environmental issues, dinosaurs of North America, endangered species, world terrorism, the Harlem Renaissance, soccer around the world, and even the route of the Titanic.

If you are a faculty member and would like to schedule a library instruction session for your class, please contact the GRMC staff. The GRMC is open Monday through Friday from 8:00 A.M. to 5:00 P.M.
Posted by MG at 9:04 AM No comments:

GIS and Football in the GRMC 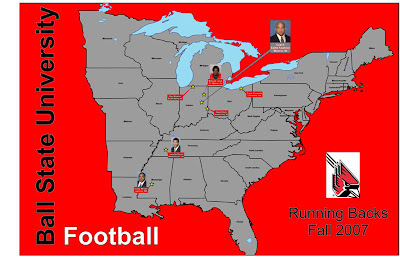 Football season officially begins today at Ball State University with the first practice of the year. Assistant Coach Eddie Faulkner greets his running backs each season with a large poster showing where the players live. The GIS Specialist in the Geospatial Resources & Map Collection Angela Gibson created this map for Coach Faulkner using GIS software. The map was then printed on the large-format plotter in the GRMC for display in the football office.

Contact the GRMC to inquire about the creation of custom GIS maps for special research projects or to print a poster on the large-format plotter. Charges for printing are sent directly to the Bursar’s office.
Posted by MG at 11:22 AM No comments:

Topographic Maps from around the World in GRMC 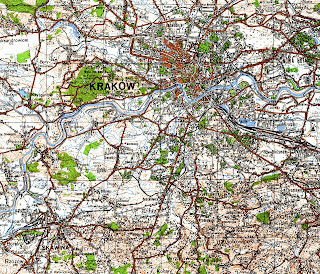 Topographic Maps from Around the World Available in GRMC

The U.S. Geological Survey topographic quadrangle maps are popular items in the Geospatial Resources & Map Collection, but what if someone needs a topographic map of Iceland for research or learning? The GRMC has that, too! There are actually five different sets of topographic maps of Iceland created at different scales in the Collection. In fact the GRMC has individual topographic maps from over fifty countries around the world, including Brazil, Guyana, Poland (shown), Brunei, Mongolia, Madagascar, Senegal, and Pacific Island countries.

Topographic maps are important tools in geographic research because they are created using contour lines, showing areas of equal elevation. These maps make it possible to measure the terrain of the countryside or the height of mountains. Architecture students find the maps useful for site planning.

All the maps in the GRMC circulate for two weeks. Please note that not all of the topographic maps are cataloged in the library CardCat system, so contact or visit the GRMC to find out what types of maps are available for specific areas around the world. 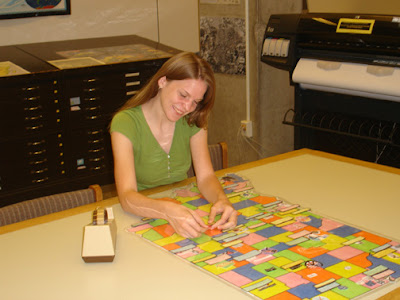 
A special “back-to-school” map display for August was created by the Geospatial Resources & Map Collection student-assistant Amanda Hunt. Amanda’s actual work-home at University Libraries is in the Archives & Special Collections, but she is also working in the GRMC for the summer.

Amanda is a junior from Vincennes, Indiana, where she graduated from Vincennes Lincoln High School. Majoring in history with a French minor, Amanda plans to attend graduate school for library science and/or history in order to become an archivist. Her dream job would be working as an archivist at a large or medium-size museum.

Amanda compiled a list of interesting facts about some of the colleges and universities in Indiana in order to create this map of “fun facts.” Some surprising facts on the map: Manchester College is the home of the first peace studies program in the United States; the President of Starbucks attended DePauw University; Notre Dame produced seven Heisman Trophy winners; and Carter’s Hot Dogs in Ball State’s Village was voted #51 on the Sports Illustrated “On-Campus Top 100 Things You Must Do before You Graduate.”

Visit the east side of the second floor of Bracken Library to view this and other map displays.
Posted by MG at 3:46 PM No comments: 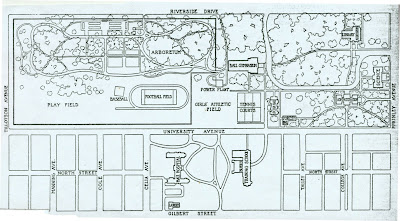 The map featured is a campus map of Ball State University from 1929. The school had just received its new name Ball State Teachers College during that year. This map is one of the maps featured in the “Map of the Month” display in the Geospatial Resources & Map Collection on the second floor of Bracken Library. This special “back-to-school” display features maps dating from 1928 to 1996. The changes in the landscape of the campus from the beginning and since 1996 are striking.

Contact the GRMC for more information about these historic maps of Ball State University.
Posted by MG at 3:36 PM No comments: