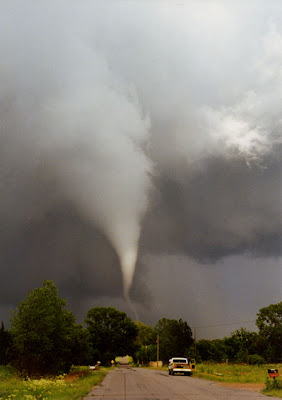 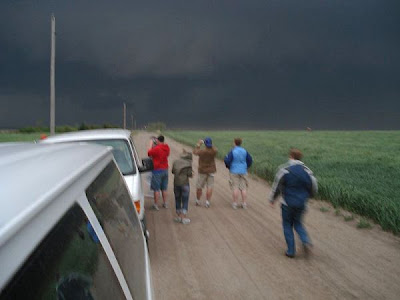 Report from the Ball State University Storm Chase Team
Each summer the Ball State University Storm Chase Team travels through the middle of America researching thunderstorms, tornadoes, and other extreme weather conditions. The mission of the team is “to provide the east-central Indiana community…timely information regarding the state of severe thunderstorms within the local area.” The team hopes their research will provide more understanding about the atmospheric environment of the area.

This year the team was led by Dr. David Call, Assistant Professor in the Department of Geography. The team traveled the Plains from May 19 through June 3, passing through nine states and covering 6,000 miles. The team went from Indiana through Illinois and Iowa to Nebraska, then chased storms into Colorado, spent time in Kansas, and wandered into Oklahoma and Texas. Then the team ventured back to Kansas and Missouri. Most of the time was spent in Kansas. “The class was a success. We saw a tornado, and nothing bad occurred,” according to Dr. Call. Photographs of the trip can be viewed at http://dacall.shutterfly.com/?emid=collectview&linkid=link4
Dr. Call is looking forward to the 2009 trip, and student interest is growing. For more information about the Ball State University Storm Chase Team, phone 765/285-1766 or visit http://www.bsu.edu/web/stormchasers/
Posted by MG at 11:13 AM No comments: 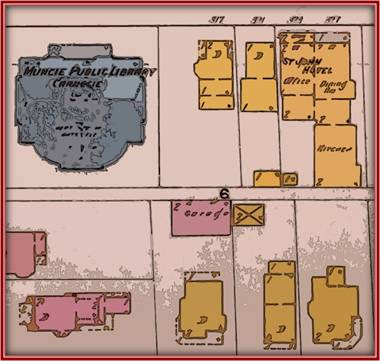 The insurance maps depict Muncie’s commercial, industrial, and residential sections in 1883, 1887, 1892, 1896, 1902, and 1911, and were produced by the Sanborn Map Company to assist fire insurance agents in determining the degree of hazard for establishing premiums for particular properties. This new resource will greatly aid researchers in locating and analyzing the changes of a specific area of Muncie over the years. The Google map is also beneficial because students and faculty can see how the study area currently appears. Users can view the Google map with satellite images turned on or with only roads activated.

Google My Maps was used to create this interactive map because of its ease of use, and many people are already familiar with the Google Maps format. My Maps also integrates well with ESRI ArcGIS software. For the Sanborn collection, the maps were created in ArcMap and then exported as KML files. Once in this format, they were imported into Google My Maps, where the maps could be customized and linked to records in the Digital Media Repository. 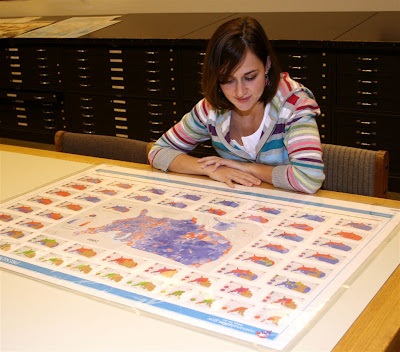 Election Day is only weeks away, and maps can be an ideal tool for illustrating information and statistics about elections. The widely-used "blue states and red states" explanation of states' party affiliations has become a cultural phrase made popular by an election map from the 2000 Presidential election.

University Libraries’ Geospatial Resources and Map Collection (GRMC) houses many maps, atlases, and other resources about elections--both current and historical. Maps depicting newly-drawn Congressional districts, maps showing election results, and maps of local election precincts are available for research in the GRMC. U.S. Census data is also available in the GIS lab, and users can access more election statistics from CD-ROMs in the Collection.

One of the most popular election maps in the GRMC is National Atlas of the United States of America: Presidential Elections, 1789-2000. This map (shown above), published by the federal government, shows how each state voted in every presidential election since 1789 with red states depicted as Democratic and blue states as Republican. It features a larger map of the election results of the controversial 2000 election. The main map displays the popular vote by county; an inset map shows the results of the electoral vote. Indiana presents an interesting study in cultural history on the map: Indiana has voted for the Republican candidate in all but four presidential elections since 1896.

The Atlas Collection also provides excellent election resources. Atlas of American Politics 1960-2000 features several maps about elections, including voter turnout. This atlas also contains maps illustrating important events such as the impeachment vote of President Clinton and topics such as the environment, capital punishment, abortion, and the number of women serving in state legislatures. The Atlas Collection also includes election resources from other countries, including the first elections in Kosovo and Poland.

Researchers can also access a new cartographic study guide from the GRMC, Cartographic Resources for Political Science and Election Research, at http://www.bsu.edu/library/media/pdf/poliscienceresourcesguide.pdf. Voters may even find these election resources helpful in making their Election Day selections.

Cartographic Resources Guide for Environmental Studies Available from Ball State University Libraries
The Geospatial Resources & Map Collection on the second floor of Bracken Library includes many resources for researchers studying issues of the environment. The Map Collection includes flood plain maps for numerous areas, topographic maps for areas around the world, soil surveys and maps from counties around the country, Gap Analysis electronic resources for land cover, forest types, and other factors, maps of important farmlands in counties around the United States, natural gas and other energy maps, and national and state park and forest maps. Maps of the rainforest, endangered species, desertification, and wetlands are available in the GRMC.

The Atlas Collection also includes many resources for environmental studies. Several atlases about water resources, endangered species, and threatened environments are available in the Collection. One Planet, Many People: Atlas of Our Changing Environment features maps and images on global environmental change, human beings effect on nature, nature conservation, and international cooperation in environmental protection. Other atlases focus on one specific environmental issue or threatened area—Atlas of the Great Barrier Reef, The Last Rain Forests: A World Conservation Atlas, Solar Radiation Energy Resource Atlas of the United States, Conservation Atlas of Tropical Forests: Asia and the Pacific.

Now researchers can access a complete list of all the cartographic resources for environmental studies on the GRMC Web page. A new study guide is available at http://www.bsu.edu/library/article/0,,59405--,00.html. Call numbers and locations of the maps and atlases are listed so that users can easily find relevant materials for their studies.

For more information about this study guide or any of the resources listed, please contact the staff of the GRMC at 765/285-1097.
Posted by MG at 11:36 AM No comments: 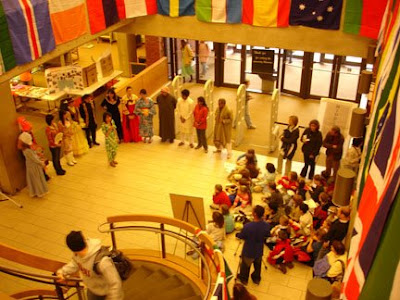 International Center Culture Exchange Programs Held Weekly in Bracken Library
The Ball State University Rinker Center for International Programs is once again sponsoring the Culture Exchange program. Each week a speaker will present a program about a particular country. The Culture Exchanges begin at noon and are being held this year in Bracken Library room 225, the Forum Room. Attendees are welcome to bring a sack lunch or snack.
The schedule for upcoming presentations includes:
Nepal—October 8
Digital Down Under: Australia—October 15
Mexico—October 22
Botswana—October 29
Thailand—November 5
China—November 12
Russia—November 19
Turkmenistan—December 3

The Rinker Center is also sponsoring the annual International Festival (shown above) on November 7. The Ifest will be held again this year in the lobby of Bracken Library.

For more information about these programs, please contact Debra Goens, Director of International Student Services, at 765/285-5422.
Posted by MG at 8:49 AM No comments: 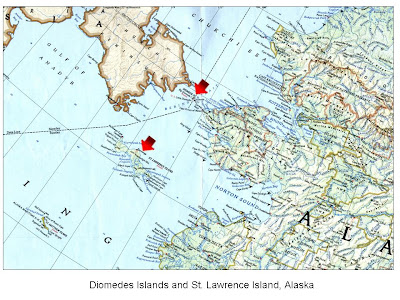 More Americans are becoming aware of the border between Russia and the United States thanks in part to John McCain’s selection of Sarah Palin, Governor of Alaska, as his running mate in the presidential election. The Bering Strait separates the two countries, and the islands in the Strait are considered strategically important.

The Diomedes Islands lie on either side of the International Date Line in the Bering Strait. When Alaska was purchased from Russia, Big Diomede Island remained Russian, but Little Diomede became territory of the United States. During the winter season, the channel between the two islands freezes over, making it possible to walk the approximately 2.5 miles between them. America’s Little Diomede is about thirty miles from Siberia. St. Lawrence Island lies about forty miles from Siberia.

The islands and their proximity to Russia to the northwest are shown on the map above. (Click on the map for a larger view). This map of Alaska was produced by the National Geographic Society in 1994 and is available for circulation from the Geospatial Resources & Map Collection on the second floor of Bracken Library. The call number for the map is G4370 1994.N31.