Historic Map of Hungary in the Ball State University Libraries 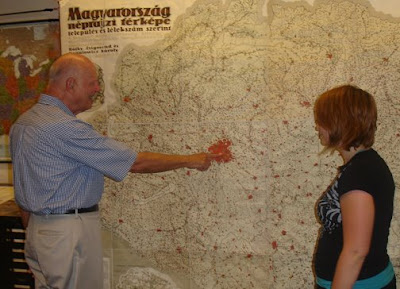 The Ball State University Libraries Geospatial Resources and Map Collection was enriched over the years with 25,000 maps and 2,000 atlases acquired through a special Library of Congress program due to the participation of the now retired map librarian, Paul W. Stout. Stout participated in six of the Library of Congress Geography and Map Division Special Summer projects—each lasting six weeks—between 1977 and 1996. These maps are valuable—sometimes historically significant—resources that can be used to enhance research and learning for Ball State University students and faculty.

The Library of Congress Geography and Map Division Special Summer Project was developed in 1951 to employ the use of interns to process the backlog of maps that the Division received from federal libraries and government mapping agencies after World War II. Ball State University Libraries was one of the many institutions to sponsor a participant in the program over the years. In exchange for their work, participants were able to select duplicate maps and atlases from the Library’s stock and send them back to their sponsoring libraries.

During a four-hour selection period in the 1983 Special Summer Project, Stout discovered two maps he suspected were not duplicates. The maps were of the Hungarian portion of the Austrian-Hungarian Empire dated 1919. One of the maps had specific notations indicating it had been used at the Peace Conference in Versailles, France following World War I. Stout remembers reading “American Commission to Negotiate Peace” stamped on the map. (The Treaty of Trianon was organized as part of the Peace Conference at Versailles in order to determine the borders of Hungary and was signed in June of 1920, so the American delegation may have used these maps as a resource for the peace negotiations).

Stout quickly showed the two maps to the Chief of the Geography and Map Division. The chief thanked Stout and immediately took away the maps. However, to Stout’s surprise, the un-annotated map was returned to him an hour later. Stout did not take the time to record information about the other annotated map because he was preoccupied with selecting as many maps as possible for the BSU Collection. Stout also noted that he did not ask the Division Chief for details “because I thought he might decide he wanted back the second Hungarian map.”

Stout recalled both maps having identical ownership stamps—first belonging to the U.S. State Department in 1919 then transferred to the Central Intelligence Agency in 1949. The map measures over six feet by almost ten feet in size. The title of the Ball State map is Ethnographical Map of Hungary—Colonization and Population by S. Batky and Ch. Kogutowicz dated 1919. The map states “designed by order of the Foreign Ministry of the Hungarian Republic.” The map shows the areas where ethnic Hungarians were predominant. This information was one of the criteria for the negotiations used by the Americans at the treaty. Based on circumstantial evidence, Stout believes this map was used by the American Delegation to Negotiate Peace in preparation for the determination of Hungarian territory.

Paul related the story of the map to Melissa Gentry of the GRMC and Steve Duecker, Information Services Librarian, so the two began to research the history of the map. Duecker was intrigued: “I thought it would be interesting to see what could be found to verify that this map was used by the American delegation to determine the border of Hungary.” Gentry contacted Cynthia Smith of the Library of Congress Geography and Map Division. Smith provided photocopies of annotations from similar maps of Hungary dated 1919, so one of these maps may have been the second map retrieved by the Division Chief from Stout during the special program. Duecker, however, could not locate a record of the map in the listings for the Library of Congress.

Research indicated that two other libraries are listed in WorldCat as owning this map—the London Library and the University of Wisconsin, Milwaukee. The American Geographical Society (AGS) and the Library of Congress were the only major map research collections in 1919. The AGS collection was moved to the University of Wisconsin, Milwaukee in 1982. Dr. Isaiah Bowman of the Society was a participant in the Peace Conference at Versailles, and the cataloging records for a number of the AGS-UWM maps are annotated “loaned by the American Geographical Society to the Peace Conference at Versailles, 1918-1919.” The University of Wisconsin, Milwaukee cataloging record for the 1919 map of Hungary contains no notes that their copy was at Versailles. Stout claims, “I think it is plausible that our copy of the map, owned by the U.S. State Department in 1919 was at the Peace Conference following World War I.”

Duecker added that researching the story of this map only fueled his interest in other maps in the Collection. “I knew that University Libraries had an interesting collection of maps. Paul’s love of maps is infectious, and this inspires me to learn more about other maps in our Collection.” The map of Hungary will be on display in the GRMC and is available for historical research and as a learning resource.