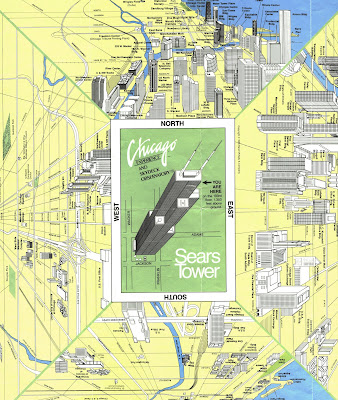 Focus of the World: Maps of Chicago Available from Ball State University Libraries

The International Olympic Committee will decide the host city for the 2016 Summer Olympics today. The four remaining candidates are Madrid, Rio de Janeiro, Tokyo, and Chicago. The GIS Research and Map Collection on the second floor of Bracken Library has a huge collection of city maps from around the world. The Collection includes street maps, topographic maps, tourist guides, and architecture plans. The set of maps of Chicago numbers in the hundreds and offers researchers and travelers a variety of resources.

Historic maps of Chicago include bird’s-eye view maps that were popular after the Civil War. The collection includes these illustrated maps from 1868, 1893, 1898, and 1916, and includes the central business district and a view of the World’s Columbian Exposition in Chicago in 1893. One of the oldest maps in the collection of the city dates from 1855, and the Blanchard’s Guide Map of Chicago in the GRMC dates from 1873. Royal Blue Line Map and Guide to Chicago was published in1924. East and West Streets of Chicago map was published in 1907. Road maps of the state of Illinois include maps of Chicago and date back to the 1930’s.

Tourists traveling to Chicago will find a number of maps and guides in the GRMC. The iMap of Chicago includes a 12-page guide with a compass. Chicago Unfolds is a pop-up map and guide, and The World on the Lake is also a tourist guide map. Place Map of Chicago is an easy-to-read map of the city. The GRMC also includes maps of the Ohare Airport area and a map featuring the Sears Tower (shown).

The GRMC has a large collection of aeronautical charts of the area and nautical charts of the city and the south shore of Lake Michigan. A set of topographic maps of Chicago and a 19-map set of geologic maps of the area are also available for researchers. The GRMC also has all of the topographic quadrangle maps for the Chicago area dating back to 1889. Geography students use these topographic maps to track the growth of the city over the last century. Chicago at the Millennium is another map showing the growth of the city using satellite images, historic topography, and bird’s-eye views.

The collection of Chicago maps also includes transit maps, zip code maps, maps of Cook County and the suburbs, the downtown area, and maps focusing on the Loop. The 2001 Chicago Neighborhoods map identifies the traditional neighborhoods of the city. There are also maps of the University of Chicago in the GRMC.

Maps circulate for two weeks or longer from the GRMC. Atlases can be borrowed for 28 days or longer.